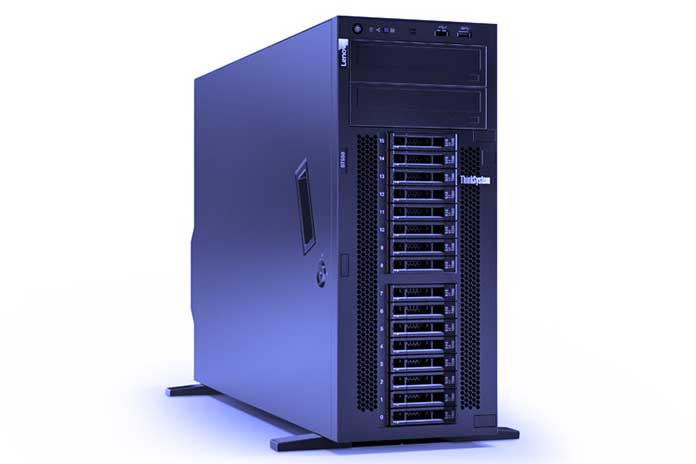 The new V3 generation of Lenovo’s ThinkSystem servers will feature the next Xeon and Epyc processors, more economical water cooling, and a host of online services.

For its thirtieth anniversary, Lenovo is renewing its entire range of servers and adding online services, including an XClarity One administration console that should simplify the hybrid cloud. Highlighting, the hardware has the latest Xeon Sapphire Rapids and AMD Epyc Genoa processors, which bring them DDR5 memory and PCIe 5.0 buses, twice as fast as their predecessors. Another salient point is that the servers are now water-cooled, a device generally shunned by manufacturers for its complexity, which would make it possible to avoid the 40% of electricity necessary for their cooling.

The cooling water of servers, hitherto confined to supercomputers, made its debut in traditional data centers just a few weeks ago. Magic readers discovered it during the inauguration of OVHcloud’s latest SB5 data center in Strasbourg ten days ago. OVHcloud then claimed that this system allowed it to evacuate 80% of the server’s heat simply with a pump as energy-efficient as an aquarium. 20% of the heat evacuated in the room is dissipated with simple fans with low consumption. There are no more fans in each server or air conditioning room. Under the Neptune brand, Lenovo offers three implementations for water cooling.

The first is to run pipes in and out of the machine. These pipes are connected to copper plates fixed on the most incandescent parts of the servers: their processors and GPUs. In this configuration, similar to that of OVHcloud, it is up to the user to connect these pipes to the cold water inlet and the hot water outlet at the outlet. At OVHcloud, they are connected to a closed water circuit, which is in contact with another closed circuit, which will dissipate its heat outside the building via a heat exchanger.

The second implementation, called “Liquid-to-Air Cooling,” corresponds to several servers sharing the same closed circuit filled with water at the factory, which is in contact with an external fan to propel the heat into the computer room. This would be the most compatible solution with current data centers. The third implementation, called “Liquid-to-Liquid,” corresponds to a closed water circuit in a single server. At the rear of this is a heat exchanger to be placed in contact with another water circuit – a priori contained in the rack shelf – which, therefore, is a particular model. This solution would allow servers to be added promptly once the customer has the correct rack shelf.

Next Generation Of Processors

Regarding electronics, the Xeon Sapphire Rapids and AMD Epyc Genoa processors were not yet available when Lenovo announced them. The first should be unveiled next week at the Intel InnovatiON event in the USA. In essence, the Xeon Sapphire Rapids will bring a hybrid design where energy-efficient and performance cores sit side by side. At the high end, these Xeons should offer 52 and 60 seats (112 and 120 simultaneous threads) at 2.5-3.8 GHz and 1.9-3.5 GHz, respectively. The cache memory (L2+L3) on these models should be 209.5 and 232.2 MB.

The Epyc Genoa will have 16 to 96 Zen 4 cores (from 32 to 192 simultaneous threads), from 2.6-2.7 GHz to 2-2.15 GHz, respectively. The cache memory will range from 64 to 384 MB, depending on the model. Initially, the arrival of PCIe 5.0 buses on these processors will make it possible to install NVMe SSDs in twice as fast servers. Lenovo is also talking about a ThinkEdge mini server based on Nvidia’s Jetson Xavier processor (formerly known under the code name Grace). This machine will only be available in Asia at first.

Eleven Servers Are Available In Around Fifty Versions

Lenovo is talking about fifty new machines. There are more exactly eleven “V3” server configurations: six based on Intel Xeon processors (the 630, 650, 660, 850, 860, and 950) and five based on AMD Epyc processors (the 635, 645, 655, 665, and 675). They are all available in a “ThinkSystem SR” rack. Four are available in “SD” racks, which correspond to the water-cooled version, and one in an “ST” tower case. In addition, more than thirty commercial bundles around four SR servers are available in hyper-converged infrastructures. In detail, the SR630, SR635, and SR645 are 1U racks; the first two have one processor, and the last has two.

As of this writing, Lenovo has not released any details regarding the SR675 machine.

The Xeon-based SR850, SR860, and SR950 are intended for so-called critical applications. Databases that require a lot of processing in RAM. Still, in 2U format, the SR850 has 48 slots for memory modules and four processors. The SR860 has a 4U case that allows it to be equipped with multiple network cards and 48 2.5-inch SSDs. The SR950, also in 4U format, accepts up to eight processors.

Hyper Converged Infrastructures For Around Thirty Use Cases

There are eighteen ThinkAgile “HX” running the Nutanix system, twelve “VX” running VMware vSAN, and four “MX” running Microsoft Hyper-V. Regarding the latter, they exist oddly only in the Xeon version. Variants include database configurations, PRA, VDI, compute, and more.

Four ThinkSystem DE storage bays complete the inventory in 2U format: the DE6400F, DE6400H, DE6600F, and DE6600H. The F means all 48 drives are NVMe SSDs, while the H means it’s a mix between SSDs and HDDs. In the SSD version, the capacity climbs to 1.8 Po. In the hybrid version, we reach 8 Po. additional drawers.

On the sidelines of hardware, Lenovo is also introducing XClarity One, a SaaS console equivalent to the “Insight…” products initiated by HPE and now found in almost all infrastructure providers. This online administration console aims to offer services beyond machines that extend their functions beyond the sale of devices. XClarity One makes a real-time inventory of deployed equipment, displays their metrics, and allows additional equipment to be ordered and even preconfigured online, particularly with the correct identifiers (Open Cloud Automation function, optional).

It is also used to collect and configure virtual machines on Azure or AWS, possibly via VMware or SAP offers, to facilitate the hybrid cloud ( TruScale function ). And then, there are functions for migrating virtual machines and data. Among the new online services that Lenovo has imagined, we can also mention the CO2 Offset Services. The manufacturer tells its customer how much its machines emit carbon equivalents from manufacture to operation. And he then offers to offset these emissions by selling him investments in eco-responsible activities carried out by an “Environmental Partner” whose name is not mentioned. This sleight of hand should allow companies to reduce the pollution level they must now declare on their balance sheet.

Ultimately, the manufacturer must also offer an Enhanced ThinkShield Security service to better protect servers and disk arrays against data theft. The details of this service are not very clear. LeMagIT understands that it is a question of delivering the machines preinstalled with encrypted disks, then, at the end of their life, recovering the equipment to destroy all their data media physically. At HPE, the arrival of an administration SaaS console, then of services to enrich it, resulted in the GreenLake program. Ultimately, this consists of companies no longer buying machines, but paying for them in the form of a monthly subscription, increased according to the number of services used.

Also Read: Corporate Security: What Are Clients And Servers?

Managing your Google account on Apple devices is easy and follow a few steps: how to do it on iPhone and Mac.Connecting your Google...
Read more
DIGITAL MARKETING