Home GENERAL Semi-Automated Tech To Be Used In Offside Decisions In The 2022 World...
GENERAL 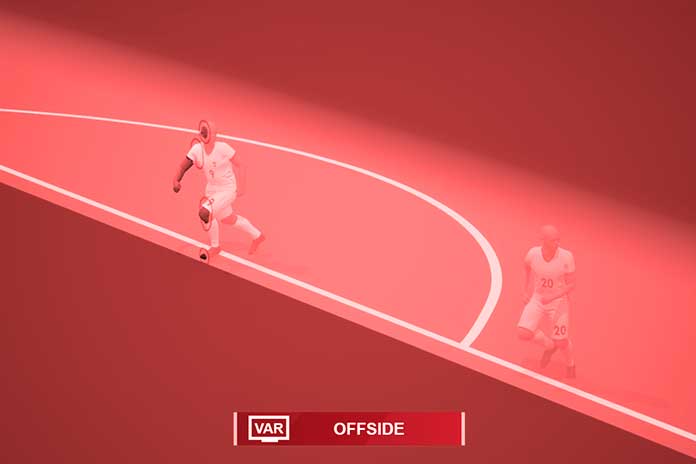 Obtaining the best information when it comes to sports rulings has changed immensely over the years. A good example of this is in the sport of cricket. Originally, all ruling decisions were made by the on-field umpires who had the final say. As the decades went on, technology was implemented where an umpire could consult a third-party authority if they felt that it was too close to make a definitive decision.

It started with slow-motion replays and evolved into even more thorough tech that could ultimately determine if a batsman was in or out of the crease, or if the bowler crossed the crease when delivering. Speculative replays using computer-based technology have also allowed commentators and the viewers to see if the decision the umpires made was ultimately correct. This evolved the game and kept it fair for everyone and is now used in top-level football matches as well.

The introduction of new tech in 2022

FIFA has decided to implement technology to do a similar thing with the tech that is being implemented. The offside rule is controversial and sometimes the referee may make an incorrect decision and will want to acquiesce to another form of ruling. The technology will help referees to make better and more accurate decisions when it comes to an offside incident. This means that the FIFA World Cup odds are going to be potentially highly volatile when it comes to results, as each game will now come under a lot more scrutiny than in previous World Cups.

12 dedicated tracking cameras will be mounted in various areas under the roof and will be used to track the ball and the players on the field at all times. Each player will have up to 29 tracking points on them so the accuracy of the location on the pitch will be near-perfect, with data sent out 50 times per second. The Al Each Rihla Official World Cup match ball for Qatar 2022 will also have an inertial measurement unit (IMU) tracking sensor in them which will send data to the operations room 500 times per second.

The Video Assistant Referees (VAR) has been successfully tested in previous live FIFA events, to great effect, which led FIFA President Gianni Infantino to sing its praises and allow the VAR technology to be continued to be used in all future matches.

The chairman of the FIFA Referees Committee, Pierluigi Collina was also quite positive about the use of VAR technology, noting that in previous trials, it dramatically reduced the number of major mistakes.

The man behind the tech

The man behind the creation and implementation of the VAR is FIFA Director of Football Technology & Innovation, Johannes Holzmüller, who joined the organization in 2008. He explained the technology himself:

“We will have the semi-automated offside set-up with 12 cameras and the official match ball with connected ball technology in all stadiums at the FIFA World Cup 2022. The latest technology will provide the video match officials with real-time offside alerts using artificial intelligence. As the video match officials will be quality-controlling these outputs, we still refer to the system as ‘semi-automated offside’ as the video match officials have to validate the proposed decision and then inform the on-field referee. By using the exact same data to create a 3D animation for in-stadium fans and TV viewers, fans will receive a quick and accurate visualization of the offside situation. This process was developed with input from FIFA’s Fan Experience Panel.”

His team has worked hard over the years to improve the innovation of the sport to make it as fair and accurate as possible to satisfy the players, the coaches, and the fans. This tech will provide just that, especially for something as controversial as the offside rule.

Casinos have been around for hundreds of years, and online casinos have grown in popularity since their inception over the last decade. Online casino...
Read more
GENERAL

CSK vs KKR Head to Head CSK is undoubtedly the strongest team in the IPL league so far. They have won 4 IPL titles under...
Read more